Sara Menker, CEO of Gro Intelligence, Believes Big Data Can Save Our Climate and Food Supply 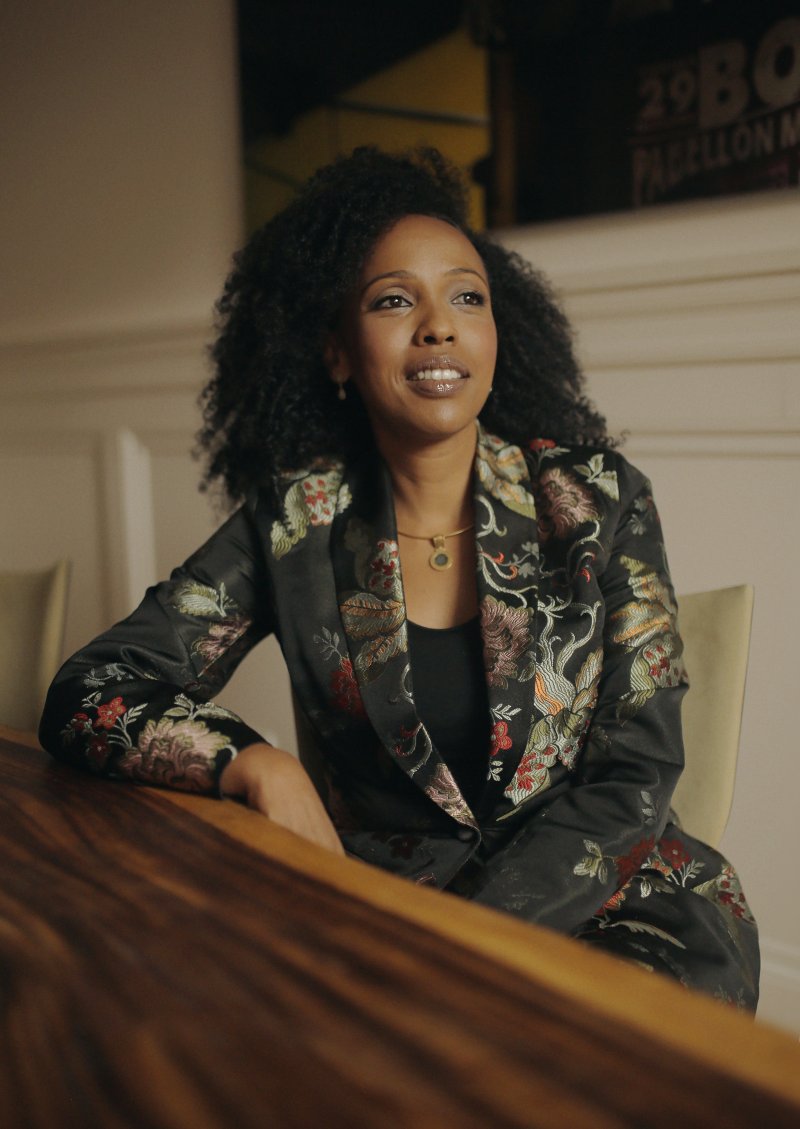 (Miss this week’s Leadership Brief? This interview below was delivered to the inbox of Leadership Brief subscribers on Sunday morning, Feb. 21; to receive weekly emails of conversations with the world’s top CEOs and business decisionmakers, click here.)

Even by startup standards, the mission of Gro Intelligence is lofty. Sara Menker, the company’s founder and CEO, says its goal is to provide tools to help confront “two of the biggest challenges we face as humanity: food security and climate change.”

Gro Intelligence uses AI and machine learning to provide thousands of clients, ranging from big food companies like Unilever and Yum! Brands to financial institutions including BNP Paribas and Wells Fargo, with a host of data and analysis on the global agricultural ecosystem. In all, Gro computers hoover up 650 trillion data points from more than 40,000 data sets—crop forecasts, satellite images, topography, reports on precipitation, soil moisture, evapotranspiration—to provide insights into 15,000 different agricultural products. The company also works with governments around the world on food-security issues to help them adequately plan for food reserves.

Want to know how the African swine fever impacted the Chinese pork market and its subsequent cascading impact on global commodity prices? Gro has a model. Companies are anxiously tracking Gro’s intelligence from Brazil, the world’s leading sugar producer, where a threatened trucker strike over the cost of diesel fuel recently drove global sugar futures prices to a four-year high. Gro even created a climate risk score for 300 ski locations around the world. “Southern-hemisphere ski destinations like Patagonia and New Zealand are likely to remain good or get better for skiers, while Japan, interior U.S./Canada and parts of the Alps will experience degradation,” reads one of Gro’s reports.

Menker, a former Morgan Stanley commodities trader—she still reminisces about mildly profane ditties to describe trading strategies (“Sell a teeny, lose your weenie”)—is laying the foundation for a new class of financial instruments, based on its comprehensive data, to help companies hedge against climate change. The company already has an index that measures the severity of drought that could serve as the basis for one such instrument. To help with this effort, the firm recently added Gary Cohn, a former president of Goldman Sachs, who has a deep background in commodities trading, to its board. (Cohn served a stint as senior economic adviser to President Trump.)

The move comes as major financial regulators are calling for the creation of such new products to help manage climate risk. “Financial innovations, in the form of new financial products, services and technologies, can help the U.S. economy better manage climate risk and help channel more capital into technologies essential for the transition,” according to a recent report by the Commodity Futures Trading Commission. Both the Federal Reserve and the Treasury Department have recently created new senior-level positions to address the risk of climate change to the stability of financial markets. The SEC is also expected to introduce new requirements related to carbon emissions and other sustainability metrics. In the wake of the devastation and economic disruption of the power outages in Texas this week, Fed governor Lael Brainard gave a speech on Feb. 18, noting that “financial institutions that do not put in place frameworks to measure, monitor and manage climate-related risks could face outsize losses on climate-sensitive assets caused by environmental shifts.”

For Menker, it’s the latest development in an active year. Gro recently completed a $85 million funding round. Menker was born in Ethiopia and went to the U.S. to attend Mount Holyoke College.

Amid the fundraising and growing the business in a pandemic, Menker was intensely involved in efforts to combat the locust swarm that has devastated hundreds of thousands of acres of crops and pasture land in Africa, including her native Ethiopia. The Gro team pored over satellite data to monitor and predict the path of the swarm to help figure out where best to deploy scarce pesticides, and worked with the government on how to ramp up food reserves ahead of a projected increase in global food prices.

Menker recently joined TIME for a video conversation about the importance of using financial tools to help manage climate risk, the coming calorie deficit and why her company employs people who collectively speak more than 30 different languages.

(This interview with Gro Intelligence CEO Sara Menker has been condensed and edited for clarity.)

Combing through your reams of data, what is jumping out at you these days?

My favorite food topic right now is inflation. Inflationary pressures around the world are causing governments to essentially adopt protectionist policies, food security as national security. So many protectionist policies have popped up in the last three to four months. They are starting to ban exports or cap exports or tax exports at higher rates. We better pay attention. This is just the beginning of something potentially much bigger.

Everyone from Russia to Ukraine to Brazil to Argentina, Malaysia and Indonesia. They’re basically saying I’d rather export less and keep stability domestically than risk exporting too much.

It’s driven by surging demand out of China. The second part, on the supply side, is that there were so many climate disruptions that happened. It’s very rare that markets face supply and demand shocks simultaneously. This past year, they faced both.

You’ve been warning for several years that there will be a global food shortage or calorie deficit in 2027. Have there been unexpected developments that have changed that equation?

No. In fact, I would say COVID exposed how fragile the supply chain is. The question you ask yourself is, one, is demand growing at the pace we expected it to? And the answer is yes. And is supply keeping up with demand? And the answer there is no. Which is why you have prices going up so much right now. And the reason is that supply is now being interrupted a lot more by climate change. Climate change has become the swing factor. Last year in the U.S. alone, different agriculture-producing regions faced wildfires, droughts, floods and destructive winds all in one season. It’s just completely crazy.

Stepping back, how did you originally pitch your company to investors? It’s a little complex; you can’t jump in the elevator and say, “We’re the Uber of dog walking.”

Your view about knowledge and data and transparency came from your background as a commodities trader.

It achieved three main things. One, it brought more participants into the market. More participants means more capital, and more capital to the industry means more innovation. So if you think about what happened was shale oil, shale gas, renewable energy, all of that was really driven by a transformation that occurred in the energy markets that was very much driven by better information flow. If we want to do the same in two of the biggest challenges we face as humanity—food security and climate change—we sort of need to start with that.

Tell me about your team.

I really believe that if we’re going to model a real-world system, let’s have a team that resembles the world we’re modeling. So let’s recruit hydrologists out of academia. Let us get the best engineers from Google. Let us take traders out of hedge funds. And let’s figure out how to make them work together, which is significantly harder than you could imagine. All of these places come with such deeply different behavior.

And how do you clean up the data from so many disparate sources and present it in a uniform fashion?

A huge amount of the data is fragmented. And the best data for each country tends to come in a local language. If you use automatic language translators—for very specific, domain0specific languages—they struggle. You still need human experts to get in and essentially help with translation, etc. So we needed a lot of languages. We speak north of 30 languages.

And are you ideological?

The SEC, the Fed and the Treasury are increasingly focused on climate risk.

All regulators want to see innovation in the space.

What has Gary Cohn, another former commodities trader, brought to the board?

I met him last summer, when I realized we were going to take these indices we already had built and create a new asset class. He has a lot of experience, bringing an index to market and knowing what needed to be done. We ended up spending a lot of time discussing it. And we just kept spending more and more time until I told him, “You just need to join the board.” He is a very active board member.

And what is the timetable in terms of those instruments finding their way into the world?

How has your trading background helped you as a founder and CEO?

Learning to deal with the downside has probably been the greatest preparation and gift to being an entrepreneur because the journey is never linear. And it’s not how you behave in the best of times. It’s how you get through the worst of times that matter the most.

I know you were very involved in trying to ward off famine as a result of the locust swarm in East Africa. Were you able to make a difference?

Sometimes you know the impact you make, and sometimes you don’t. I think we moved the dial. I was frustrated we couldn’t move it more. It was very personal for me. I’ve seen it; I know what the effects could be. It sucks when human suffering is not treated equally.